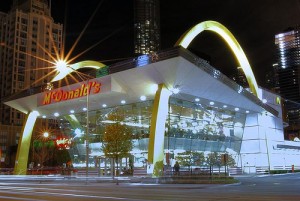 Last week I was with a couple friends talking about McDonald’s. I added some application on my phone for my blogs, but apparently it didn’t post up and now I have to re-write it.

Whether it’s chicken nuggets, big mac’s or a McFlurry, we all love McDonald’s – and if you live in the city, you should know that Rock ‘N Roll is one of the very few that is open 24-hours, and you may not know that it is a trap.

1. This isn’t a problem if you go late at night, but if you’re not lazy and don’t go through the drive-thru, you need to park. There is absolutely no parking on those side streets and you are forced to park in their parking lot. The deal is if you spend $10.00 parking is free, but if you don’t it probably costs $20.00 because it’s Chicago. Anyway, you have no choice but to park because you’re hungry which brings me to my next point..

2. Did you know that the menu prices there are almost $2.00 more than the menus at the other locations? I always get a #10 – the 10 piece nuggets meal.. and I noticed that I pay about $8.00 at Rock ‘N Roll and a little over $6.00 at the other ones. I guess it’s because it is a nicer environment in there. Obviously you are going to pay up that money because you just parked, and if you don’t pay then you’re screwed paying for parking – so basically, you have no choice.

3. This part is funny how it worked out because this advice I was going to give ended up sucking because of what happened to me last night. I was going to say that everyone should just go to the 24-hour McDonald’s that is about 4-5 blocks away from Rock ‘N Roll. BUT, I highly suggest not going there.

Last night after the concert I went to go with two friends. We spent literally 10 extra minutes trying to find the other one and finally got there only to wait in a line that took about 15 minutes to get to the front. 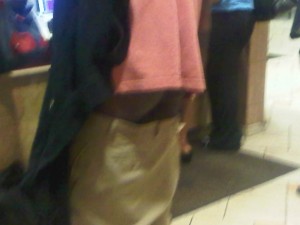 You look over to the right and you see two security guards, then that got us thinking..  since when did McDonald’s need security? The photo to right explains it all.

This guy came out of no where and cut in front of a line – like that. He really had no shame, because he kept lifting that shirt up like he was on a couch in his house. You could see everything – and I mean everything.

That wasn’t even the most disturbing part. It was when he picked his butt – not the cheeks, literally inside.. with his bare hands. He touched the counters, and cash to pay for his food. Then it just started smelling, to the point where they lost some customers, which is where security came in. They asked him to wait for his food on the other side.

I feel bad for my friend who paid after him because his change was the dollar that came from the guy who was picking his butt. I was so hungry when I came into here, but after this I couldn’t even eat.

So the next time you crave McDonald’s.. you have to make a choice: get stuck in a trap and pay more, or pay less but don’t complain if there are dinkleberries in your food.