What You’d Never Guess About My TV Appearances 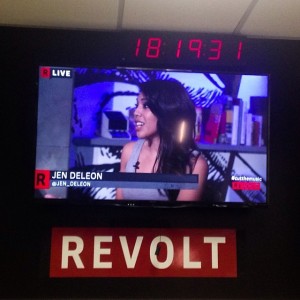 RevoltTV – Relationships between the artists and the media.

Last week, I was a guest on RevoltTV, where we talked about the relationships between the artists and the media.

This was my third live TV appearance, and I’ve noticed there has been a pattern with all of them – I never had a heads up that I was going to be on TV, and always found out the day of (2-3 hours ahead of time at most).

The first one happened in November 2009 for The Oprah Winfrey Show. All I knew was that I was going to sit in the audience and watch the show, until I arrived at security and the Producer pulled me aside and said “okay, let’s get Jen in hair and make-up.” This was my first TV appearance, and my first interview – saying I was nervous is an absolute understatement.

The second one was for SKEE Live in October 2013, and they asked if I wanted to to be on the show a couple hours before taping. The way Skee’s show is setup is the main studio, and then outside there’s a balcony of fans – think TRL. What ended up happening was Skee tossed to me on the balcony, and I asked Pusha T and Juicy J about their NFL predictions because they had just aired an interview with Adrian Peterson. I remember being so nervous because I had NEVER done live television reporting/hosting, I couldn’t hear because of the fans and I was scared I’d mess it up. Thankfully, it all went well. One funny thing about this was they had to zoom so close into my face that everyone’s faces in the background were cutoff so the shot looked hilarious! Literally, my head, their shoulders. Moving forward, I need to step on a box, or wear heels.

The third one was with RevoltTV when their Content Manager called me at 11 A.M. to see if I was available to come into the studio to be a part of one of their segments – I had to be there at 2 P.M. This one was fun because it was a panel discussion – I definitely want to do more of these! (I’ll add the video in my press section later this week).

These experiences have taught me to be prepared for ANYTHING and always be camera ready. You can think something you’ve wished for will come later in the future and you’ll have time to prepare, but no, it can happen at any moment. If someone told me I would be on TV in a couple years while I was reading teleprompters in high school for our morning news, I would have laughed. As for being camera ready, all three of these times, I did not look my best and ended up wearing the first thing I found in my closet lol. I know I’m cheap, but I’d at least like to wear a nice, new outfit for TV appearances and be somewhat presentable. I have yet to learn my lesson though, because I still sometimes walk around in public with sweats and no make-up on. Slowly but surely, slowly but surely.

Big thank you to the outlets and networks that had me take part on their show. They were all such a blessing as I learned so much from the experience, and it was even more confirmation that I was absolutely made for television. The feeling I get when the cameras are turned on is truly indescribable – and God willingly in 2014, these random TV appearances will turn into something consistent.

[RELATED: 10 Things That Make Me Unattractive]