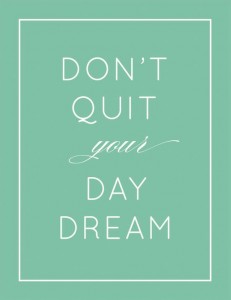 1. Commit: Commitment is the first step – you have to be willing to wholeheartedly commit to your vision. Just like a relationship; there will be ups and down, but you have to be in it for the long run.

2. Don’t Be Afraid to Ask: There’s been numerous occasions that I’ve had to request time off, reduce my hours, and even take days off. I work in a very demanding field that usually doesn’t grant those requests, but I’m assuming that’s because no one ever bothered to ask. They rather not risk being told “no” than to actually ask and go from there. A quick tip when asking for requests: Never make them feel like it’s a one-sided deal. For example, when I would take a day off or leave early, I would take on an extra task to balance it out.

3. Give 100%: Now, just because this isn’t your dream job, that doesn’t mean you can slack off and not get your work done. Not only is that unfair to your employer that pays you for your work, but it’s unfair for the customers that you service. The fact that I’m efficient at my 9-5 job and I try to go above and beyond, has given me leverage when I ask for these types of requests.

4. Stay Inspired: Working at a job that doesn’t require creativity makes it easy to forget what inspires you. Whatever it is that inspires you; keep that close.

5. The Real Work Begins After You Clock-Out: Don’t stop working. After work, I mentally prepare myself for my hour-long commute, and then I prep myself for some more work when I get home. Spend some time perfecting your craft, researching, and connecting with people in your desired industry. Whatever it is you want to do, work on that continuously.

6. Don’t Give Up: Juggling school, work, internships and everything else is stressful, but it’s not impossible. If I can do it, there’s no doubt you can do it.The number one thing that helped me was knowing that it was only temporary and that all the hard work would pay off.