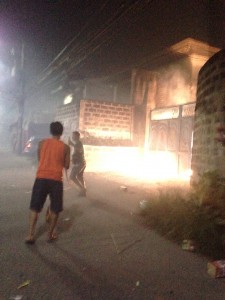 I brought in 2014 with a cut-off Michael Jackson tee, some leggings, threw up my hair in a messy ponytail, wore smeared make-up from my 4-hour nap, and Target flip-flops.

Every year, I celebrate NYE with my family, and this year, I spent it with my loved ones in the Philippines. This was hands down, one of the best celebrations I have ever had.

It all started when my two cousins woke Chris and I up with the most annoying NYE horns ever at 8:30 P.M. You could literally go deaf with those shits lol. It was an instant wake-up that dragged us to the kitchen to eat some amazing food, and it was off to the party right around the corner.

1. Singing karaoke for the whole neighborhood to hear – they had it setup in the middle of the street, with the mic at it’s max. They started at 4 P.M. and this went on until 4  A.M.

2. Playing games where you had to pop the balloon with your ass, literally. The teams were split up boys against girls and you had to hop across the street, around a chair and then pop the balloon. That was painful. Scratch that. Extremely painful considering I have no ass whatsoever lol. The girls won though!

3. Drinking beer shots. Yes, beer shots. In the Philippines, the tradition is to drink beer like shots so you don’t know how much you drank. I was done for. We were all done for.

4. Funny photos with my Lolo and Lola. FYI, “Lolo and Lola” means “Grandpa and Grandma” in Tagalog. As mentioned in my other blog, this is our first time seeing each other in 4 years. Of course, we didn’t take any serious pictures – one was a funny face where we were pulling on our cheeks, and another was us saying “cheers” over Red Horse Beer.

5. Dangerous ass fireworks. Those were the best. It looked like a war zone. It looked like World War Philippines. Over here, they light fireworks where ever they want, and then you basically just make a run for it if you see it coming. My Mom told my cousins not to let us touch the fireworks, we didn’t understand why. I mean, we light fireworks at home – but the Philippines doesn’t even know that poppers and sparklers exist. They light the real shit. The ones that can cause fires.

I can definitely say, it was a great start to the New Year. And if I could have it my way, I’d have NYE in the Philippines every year, but with my family back in the U.S. here as well.