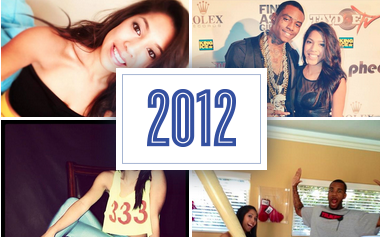 As you know – Facebook has an option to do your 2012 Year End Review. Here was mine and a fun fact that I never shared.

December 31 // Photo: AMA’s Red Carpet – This was my first awards show and for once, I was not interviewing on the carpet, but actually walked it. I knew I’d attend an awards show sooner or later since my move to LA, but thought it would be in 2013.

Fun Fact: The stages of awards shows are much smaller in person. Also, the shows are too long! I wanted to leave after the first hour because it was a lot of sitting around. Not complaining though, it was a great experience and I’ll definitely be attending more in the future.

Decemeber 2 // Limited G Photo Shoot Album – I did a shoot last summer with Limited G, the sister-company of GowhereHipHop.com. There were three different looks, but we’ve only released the first look – keep an eye out for the rest!

Fun Fact: This shoot took forever because I couldn’t stop laughing. I can never look straight into a camera without smiling or laughing because I look like I’m going to kill someone everytime I try to keep a straight face.

Fun Fact: I did not attend the show when he performed – but did the week prior to this photo, which was for The Game and Tyga’s “Celebration” performance.

November 24 // Photo: Tyler Creator and I  – First met him at the Taylor Gang 2050 Tour a couple weeks before this picture – this was taken at his store re-opening.

Fun Fact: When I introduced myself and asked if he would do an exclusive with HotNewHipHop, he said “only if we’re naked.” When I said no, he said, “well at least let me do my stripper dance,” and he started humping a wall. He also saved his info on my phone as “Tyler Mr. Hot Sauce.”

November 22 // Photo: A repost of Game’s Instagram photo from his turkey giveaway – Most of the comments were fans saying I was horrible for taking a turkey (which I did not do)!

November 8 // Photo: Interview with Los – The interview was after his music video shoot for, “Born a King,” which I had a cameo in.

Fun Fact – Following this shoot, I went to one with Talib Kweli to introduce myself. Ended up getting a cameo during the dinner scene of “Outstanding.” – Not sure when it’s coming out, but I’ll let you know when it does! It will look like I don’t own clothes because I didn’t know I was going to be in either of them until I was on set so I’m wearing the same outfit!

September 9  // A check-in at the Gibson Ampitheater for my first assignment in L.A. – Four days after my move, this event came up. (Mary J Blige tour).

Fun Fact: Being a noob, I could not find my way around and ended up on the opposite side of where I should have been. The manager had to send a security kart to get me.

September 2 // Dad’s Birthday and My Going Away Party Album – I had a small going away party with my family and closest friends.

Fun Fact: The day before I was supposed to move, my Dad freaked out and called off work to drive me to California. We went straight to LAX as soon as we got there, and he was back to work that night. Yup, I have an amazing Dad.

August 14 // Status: I am very excited to announce that I have recently accepted a job offer from HotNewHipHop.com, and will be moving to Los Angeles in three weeks! I can’t wait to see what God has planned for this next chapter in my life – all I know is, it’s what I’ve been praying for, and it will be great. Thank you all for the support you’ve provided me since day one. As always, I could not have done it without you!

Fun Fact: I knew for over a month that I was leaving when I posted this. Just didn’t want to tell everyone until I had a set move date.

August 12 // Interview and Events Album – I’ve been posting pictures in this album since 2010. It popped up on this day because of pictures I added from the Lollapalooza VIP Lounge at The Hard Rock Hotel.

Fun Fact: I ran into B.o.B. when we got off the elevator, and he remembered our handshake! (We made one up in our interview from SXSW in March. Didn’t think I’d run into him again so soon, but did in April for his listening party then again during Lollapalooza weekend in August. 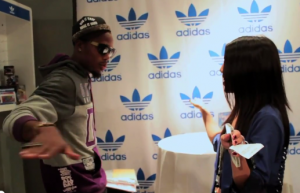 Fun Fact: All the fun facts I’d like to write about, I can’t. Lol

July 25 // C.J. Watson’s first press conference with the Brooklyn Nets – C.J. was asked a question about the documentary I shot with him in 2011.

Fun Fact: The reason they asked this question was because of my Instagram photo of us at his camp in Vegas, where we showed the documentary for the first time.

July // Started working for HotNewHipHop – Got hired as a correspondent.

Fun Fact: This job would have never happened if it weren’t for Craigslist – weird, right? I’ll share more of that story in another webisode.

June 28 // Birthday – Thank you for all the birthday greetings!

Fun Fact: I worked the ENTIRE day until I went to dinner – No days off.

Fun Fact: Nothing fun about the status – but along the lines of it, my cousin’s wedding is in April and it is the first one of our generation, and I have a Godson Dominick, who only had a 20% chance of living. He’s a miracle baby!

May 16 // Status: Decided to take a spontaneous trip to LA literally 48 hours ago. Not sure what the game plan is, but I have the camera ready and I refuse to come back without some interviews or new connections. – Most random trip of my life.

Fun Fact: This trip is what made my final decision on moving to LA. Find out why here.

March 27 // Tags in the Gowhere Hip Hop album – If it weren’t for GWHH, who knows where I’d be today. Very grateful to have met Maks G and Sgt Tibs!

Fun Fact: I started working with GWHH after they sponsored my Haiti fundraiser event in 2010.

January 3 // Status: got into a 4-car accident, spent 5 hrs at the ER, and I kid you not, when the doctor asked if he could get me a warm blanket, water or anything – I asked for the final score of the game. how bout them bulls?!?! oh yeah, and I’m okay. – That accident was scary.

Fun Fact: I was on my way to Portillo’s….. (people who really know me are probably laughing at this).

And that ends my year end review. I forgot about some of this stuff, and to think that this all happened in 2012 is a trip. One of my goals for 2013 is to write more because although these were great highlights, there are some missing. Knowing I forgot about these makes me paranoid that I’ll forget about all the future stories so I need to start sharing them right away!

God really gave me more than I could have ever imagined or deserved in 2012…Forever grateful.

As always, thanks for the love and support! Have a safe and fun NYE!