The Man Who Pretended to be my Brother 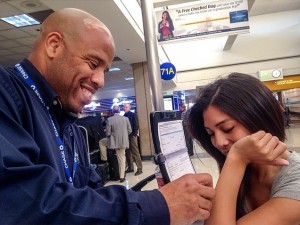 My mom turns 50 this week (crazy, she doesn’t even look like it) and of course that called for a trip back to Chicago!

I actually didn’t think I was going to make it. LAX had a ground stop due to “unspecified computer issues.” What does that even mean? How does that even happen? I can’t even lie, I thought it was about to be some terrorist shit or something especially when I saw the helicopter just hanging out above the airport. Anywaaaaaay… I was so irritated that I was delayed 3 hours until I met two wonderful United employees.

It started with me walking back and forth in the wing and trying to find a stupid outlet that worked and was available. I thought I finally found one, but of course it didn’t work. Why do the outlets at the airports never work? One of the most annoying things ever. On top of it not working, I hit my arm against the wall because I’m a klutz and it picked my scab that I got from when I burned myself on my oven. Again, klutz. Don’t ask – and I swear there’s a purpose behind telling you that random story. Keep reading.

I looked across the room and found an outlet, but it was behind the United Mileage Credit Card kiosk. I asked if I could use it and the employee let me. It was time to actually relax.

The same guy came up to me and asked if I wanted to apply for a credit card. I really have no business opening a card, but I guess that’s what hanging out at an airport for 4 hours does to you. The conversation started with him asking what nationality I was – when I told him “Filipino,” he yelled “She is Filipino! We were right!” to his co-worker (a Filipino lady that reminded me of my mom). Of course, the lady started talking to me in Tagalog and they found it hilarious that I refused to speak it and kept answering in English (the guy has a Half-Filipino son). This later turned into them noticing my scab, feeling bad for me and then them going out of their way to find a first-aid kit. They treated my scab like I was their kid lol – he whipped out the alcohol wipe and started rubbing my scab and I wanted to cry lol, but felt better once he put a band-aid on it. Definitely felt like a kid, and by far the best customer service I’ve ever had in life lol.

On top of nursing me back to health, when another guy came up and was trying to hit on me, the guy yells, “don’t even try! that’s my little sister.” LOL. Clearly, I found my airport parents. I ended up hanging out with them until my flight, where we had an awesome conversation about their kids, where they’re from, etc. OH. And you know what else I found out? I wanted to get a chicken ceaser sandwich at one of the deli shops so I asked if they would watch my stuff. When I told them what I was getting, I found out they get those same sandwiches for $2.00 from a vending machine. (They said if it was earlier in the day they would get it for me lol) My sandwich was $10. What kind of shit is that?!?! It wasn’t even that good either.

I have a love/hate feeling towards people. I hate being around crowds, but I can also get along with anyone. Weird.

[SEE ALSO: 5 Tips to Survive in the Philippines]