The Day Kanye Avoided Me 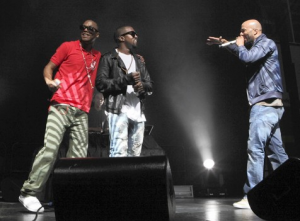 I thought today was going to be a terrible day, and at first – it was lol. Tuesday’s are my longest days of the week:

and on top of that, another long day for wednesdays and thursdays.

I woke up earlier than usual, got ready and when I got outside saw that it was starting to rain hard. Of course, my umbrella broke awhile back and I never invested in another one. I went off to the bus stop, and it was not coming anytime soon apparently (CTA cuts are killing me) and ended up cabbing it to NBC.

I was cold, tired and my hair and clothes were soaked from the rain. This morning was not going so well, until my boss came in and told me we were covering a Kanye, Common and Lupe Fiasco event at a Chicago Public School – this completely turned my day around, because I was hoping to meet Lupe at his Steppin’ Lasers Tour in Milwaukee, but that didn’t happen – and I love the music of Kanye and Common as well.

When we got there the assembly did not start yet, and all of the media was placed in the back to get footage, pictures, etc. I was in charge of taking pictures for the event.

The first person that came out was Lupe Fiasco performing “Superstar” and then later Common stepped foot on the stage and they performed “Universal Mind Control” together. (This performance gave me the chills, they were both just amazing!) After, they introduced Kanye West, and this is when media needed to step out of the auditorium because film and photography was not allowed (#treated). We were then let back in and I placed myself on the left side of the side, and noticed Kanye was no where to be found – but I could still hear him…

I looked up and hear comes Mr. West performing and high-fiving the students on the floor. He was coming full-on in my direction, so of course my first instinct was to start taking pictures – and that was not a good idea lol.
I flashed the first picture, or I should say, I was about to flash my first picture once there was a clear view of Kanye, which was literally three feet away from me but of course when I played back the shot, I noticed two security guards came out of no where in front of the shot. I was a little confused because it happened so fast, and I was just looking at Kanye two seconds ago. When I was about to do it again, he turned around and went back towards the stage – again, #treated. I couldn’t help but think he was avoiding me because I had this giant camera pointing towards him and the rest of the media was in the back.

The next thing I heard was “check her film, check her film.” I got pulled aside by two security guards by the door and I had to show all my pictures lol. I was so scared, but hey that was not my fault they let us back in and I just so happened to be where Kanye was. Once I was good to go they let me back where I was standing.

I began conversation with the other security guard that Kanye actually bumped into, and he talked to me saying that there is strictly no pictures or video allowed to be taken of Kanye, and that’s why he went the other way haha. Oh well, at least I was close to him? I wish I hadn’t pulled up the camera and I could’ve at least high-fived him myself lol. Too bad.

Anyway, the performance ended by everyone singing Happy Birthday to Kanye and then he exit the stage. Common and Lupe closed out the performance, congratulating the students with their accomplishments of graduation and stopping the violence.

I was still standing in the same spot and saw them exit the building out of a black SUV.

Anyway, now that my story is out of the way, I bet you are wondering why these artists were performing at a high school. Every year Chicago Public Schools keep track of attendance, GPA’s and misbehavior incidents. Whichever school has the least amount won the concert with The Kanye West Foundation, and then I believe it was 2 or 3 others appearances from Kanye, but not performances.

It was a great experience, and I love what all three of the artists did for the high school. It has a great, positive impact on students to do better in school and stop the violence. I have high respect for all of them, and on top of that, it was Kanye’s birthday and instead of partying and being with his family and friends, he was out fighting for a cause.