How to Skip Long Lines at Six Flags 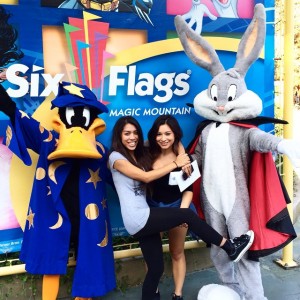 I went to Magic Mountain for the first time yesterday – I felt like a little kid! I hadn’t been to Six Flags since back home (2008) and I heard MM was the best one. Anyway, I went with Rikki. We’ve been planning to go for seriously 4 months probably. She hooked it up with the Season Passes, and well… I wanted to contribute. How? By pretending like I sprained my ankle so we could skip the long lines.

Look. I know. I’m going to hell. BUT, those lines were at least 1 hour long, sometimes even 1.5 hours, and I don’t have the patience for that. Here’s how it went down:

I got an ankle brace at CVS ($17.00-$20.00), and went to MM. We got our passes and went to Guest Relations. (For the record, the only reason I know the first steps of doing this was because of a co-worker lol).

I’m not even going to lie, I had a little limp going on. Had to play the part, at least until I got the pass smh. Went up to the guy, I was nervous as fuck because I’m a bad liar, but it actually was really easy. I just said, “I called yesterday, and I was instructed to go to guest relations as I sprained my ankle and want to avoid waiting in line to keep the weight off of it. Is this the right place to go to for that?” Guy says yes, gives me a paper to sign, asks for my name, how many guests I have and gives me a booklet and piece of paper. The booklet were the safety guidelines, and the piece of paper had a list of the roller coasters, with a time column and initials. Now, I bet you’re thinking what I thought – you’d be able to get on all the rides, right? WRONG.

The way it works is that you can only hold one roller coaster at a time, and the time you have to wait is the same time as everyone else – the only difference is that you don’t have to physically wait in line, and just go through the exit. Still pretty cool and better, but I was looking forward to going on everything.

Sidenote: They really aren’t strict at all about these passes. No questions were asked, and there was a couple in front of us who had the same pass and asked, “so, what’s your deal?” told him I sprained my ankle, his excuse? Their friend said he had anxiety and can’t wait in lines (but the friend got kicked out later because he dropped his piece).

Second sidenote: If you’ve never been to MM, Tatsu was our favorite ride and X2 probably gave me a mini concussion (they need better support for that ride).

What excuse would you use?

[SEE ALSO: How I Turn Up On The Weekends]