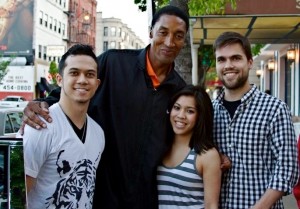 Here’s an original article I wrote for gowherehiphop.com, hope you guys enjoy it!

I have had the pleasure of meeting and getting to know Scottie Pippen because of my internship with the Chicago Bulls at BullsTV; however, I have not been able to talk to him in about a month, so I was looking forward to seeing him at his meet and greet.

I attended the NBA/T-Mobile event with Tibs and Teddy. Unfortunately, it ended earlier than expected, so we didn’t have a chance to talk with Scottie there. It was a bummer, but instead of going home we went to eat at one of my favorite spots in Greektown, Mr. Greeks.

Our crazy timing began when Tibs ran into Rain Man, the producer of Chicago pop group Krewella, and their manager Lim, at Mr. Greeks basically as we all walked in. So we all sat down for dinner around 6:30. Time flew by – we didn’t even realize it was nearly 8:00 by the time we were done, but talk about perfect timing…

When I was walking home Teddy gave me a call and says, “Scottie is eating at Athena (there are glass windows to an outdoor patio where they happened to see him), but I don’t know how you would talk to him since he’s eating.”

The thing that is so ironic about that was when we saw Scottie leaving T-Mobile, we were joking about how funny it would be if he just left the area to trick everyone to thinking he was leaving, but instead, circling around the block and coming right back – which ended up happening (Athena is down the street from T-Mobile).

Anyway, I took my chances and it all ended up working out perfectly. By the time I was nearby the restaurant, he was on his way out to his car. I could not get his attention at T-Mobile because everyone was taller than me and he didn’t see me, so this time I went behind his car door. Before he went in, he noticed me and screams, “There’s my girl!”

I have never been able to talk to him outside the United Center, so I enjoyed finally doing so. We were all more satisfied with what happened outside the restaurant, rather than trying to talk with him among the chaos at T-Mobile.

Whether it is big or small, I believe that there is a lesson in every situation. In this case, I have learned to not be upset if things don’t go the way I had hoped for or expected – there will always be something better.