The Closest/Funniest/Weirdest Cousins You’ll Ever Meet 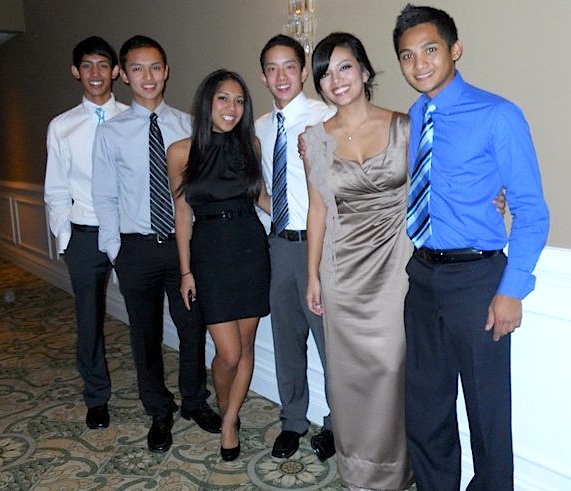 This picture was taken at a wedding two weeks ago, and although it is blurry I absolutely love it. If you didn’t already know, my family is very family-oriented. I was working on a post about my whole family but it’s not done yet because it is not where I want it to be. All you need to know, is you’ll probably never meet cousins as close as we are. We do everything from spending the whole day together, we all text each other almost everyday, we’re very open with each other lol, and we honestly joke about how we’re either A. going to live together in a mansion or B. all live on the same street. If we had some kind of reality show, people would just think we’re weird. We can’t help it, we lived in the same neighborhood at one point, and when we’re all in the suburbs we live five-minutes away.

Some random stories I could think of off the top of my head:

1. Andrew peed in a pink bubble jug container – do you guys remember those? Yeah, and then after that him and his sister told me it was apple juice so I drank it. (I was like two) Of course I didn’t drink all of it, i’m not that stupid haha it was like a drop!

2. We were all boogie boarding in Hawaii and Leia had what looked like a leech on her arm. She asked me to take it off, and I swam away because I was scared. She picked it up, and threw it at me. I got stung (it was a jellyfish), I bled. We both screamed off onto shore.

3. We’ve all seen Steven suffer some kind of injury, and we enjoy making fun of him.

4. We all went through a pokemon phase, I got the holographic Charizard in my booster pack and Andrew was mad about that one, so he drew a hmm… private part on it with permanent marker.

5. Leia and I used to play “store” where I would pick things in her room and she would ring me up. I used to steal all her stuff, until she caught me.

6. Andrew asked if he could shoot me with a pellet gun to see if would hurt. Of course, I said no – and he shot me with it anyway.

7. Steven and Andrew got Dengue (it’s like West Nile but in the Philippines). Chris got stuck with them in the hospital for I think two weeks? And up until this day, Chris just makes fun of how they were suffering in the hospital even though they could’ve died lol.

8. When we were kids, we liked to play jokes. Someone pooped in a bag, lit it on fire and we got scared and threw it down a slide and ran away.

9. We were attacked by a German Shepard, I’ve never ran so fast in my life, Steven and Chris were on the other side, Andrew stood on a fire hydrant and watched us run for our lives. When we all made it back into the house, Chris was the last one out there and threw Andrew’s Nike football to distract the dog. Andrew wouldn’t let him back in the house because he was pissed and wanted his ball back. (No one was hurt).

10. At this wedding, Leia was one of the bridesmaids and as she stood at the front, we were all just trying to make her laugh so she would look stupid.

I understand that all these stories sounded really mean but that’s just how we are. We’re that close that we can get away with doing these things. I mean, we’re not always like that – those are just some of the funniest things that happened. I swear, one day I am going to just tape us without them knowing and just post the videos up.

We have a strong bond that no one would ever be able to break – and if you try we will ruin your life. Even though I am clearly the punching bag of the family (sometimes if we’re bored it results to “let’s just make fun of jen”) and they go on about how short I am, talk about how my shoes are small enough to hang off their rearview mirror, my birthmarks, how I am a man lol I don’t care, I freaking love my family! haha