PHOTO: The Loss of The Ring 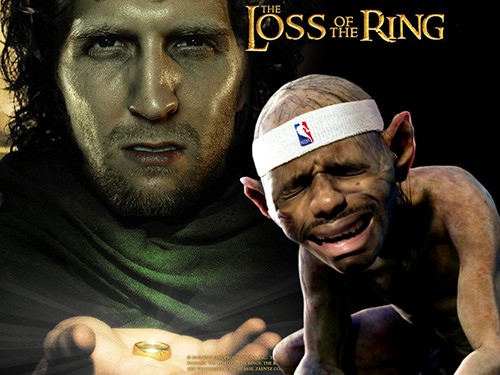 I really didn’t have anything against Miami at all – I was just hurting over The Bulls… so I decided to post this creepy, and I must say, creative picture I found on twitter. [Whoever made this, please contact me so I can give you credit].

I used to actually like Miami, but then of course that changed, and the only thing I liked about them by the time Lebron and Bosh decided to join Wade, was the fact that Spoelstra is Filipino. He’s probably my cousin – since people tend to think all asians are related. [I don’t actually think we’re related, but it’s interesting that he’s the first Filipino-American Head Coach of the NBA and not a doctor].

Anyway, I give Miami credit for their come back and performance all throughout the playoffs. I can’t even lie, although The Bulls beat them throughout the regular season, I was nervous for the Eastern Conference Finals because they got their chemistry together.

So, sadly, after The Bulls were eliminated, I became bitter and jumped on the bandwagon of The Mavs.

I must say, cheering for The Mavs was by far the most I have ever cheered for any team that was not The Bulls – but you won’t be hearing me cheer for them again lol, because The Bulls are getting that championship this season.

With that being said, Congratulations Mavs! I am happy for Kidd and finally getting a ring [talk about dedication], and Nowitski definitely deserved the MVP title.

And now? I count down the days until pre-season and go through my NBA withdrawals. Oh baseball, why must you be so boring? What am I supposed to watch now?!