Why I Don’t Have Cable 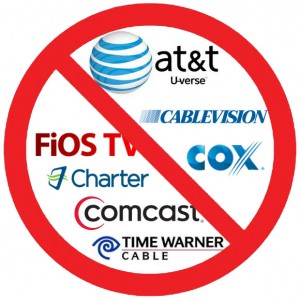 I was on the phone with my brother and Dad earlier, and one thing they found very amusing was the fact that I don’t have cable – and haven’t since I moved to LA (September 2012).

Before I continue on, let me say, I do have internet lol – I’d be lost without my internet, but chose to not have cable because I don’t spend much time watching T.V., there are other resources, I save money and it has helped me to stay more focused.

So, here are the reasons why I don’t have it:

I hate the news – One reason people would probably say I should have cable it to keep up with the news. Well, I hate that shit. Why? Because news 99.9% of the time is something negative – I don’t like being around negative things or people.

Netflix – I live off Netflix. I’m weird as hell though because I don’t use it to watch movies. I use it to watch series I’ve already seen before lol such as Desperate Housewives, Pretty Little Liars, 90210 and One Tree Hill. (Don’t judge me on my choice of television, they’re great shows)! Shoutout to everyone who always gave me their passwords, because as much as I watch Netflix, I have never had my own account, and still don’t up until this day lol.

On-Demand – The only series I’m keeping up with right now is Scandal. If you haven’t watched Scandal, you’re missing out on life. It airs every Thursday at who even knows what time because I never watch it when it does because I don’t have cable – I catch it on-demand the same night though! So, why do I need cable if everything I want to see ends up being on the internet anyway? I’m going to need the other Scandal lovers to stop tweeting about the episodes though considering I catch it about 3 hours after everyone else sees it. Thanks.

More Focused – I used to watch tons of T.V. back in Chicago – I’d watch Friends, Family Guy, Keeping up with The Kardashians and Chelsea Lately religiously. Now that I’m out here though – I have no desire to do anything but something towards my career, so why pay for something I’m never going to use?

The funny thing about all of this is that I do have a T.V. in my living room, but only use it to plug in my HDMI cord to stream whatever I’m watching on Netflix or On-Demand on a bigger screen. No cable. And that probably won’t change for a very, very, very long time.