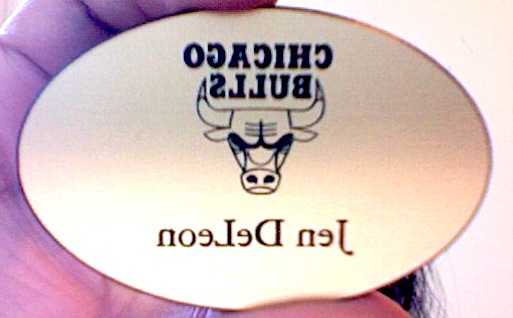 Last night was a start of a new chapter in my life: BullsTV. I am not going to tell you what I do or what I did, I am just going to share the interesting stories.

The story of how I even got there is probably the most interesting, but I will save that for another post. I don’t want to forget what I wanted to say about my first day lol, here it goes:

I am so unbelievably excited for the season and the first day was definitely a success. I met a lot of great people, and even some who remembered me from two years ago when I tried out for the Incredibulls (the people who throw the shirts). It was crazy because the year after I tried out, I ran into the woman in charge at a Bulls-Spurs game. She told me she was going to give me the spot and thought I was trying out for the Luvabulls, and assumed I would take that position over the Incredibulls. She didn’t know I wasn’t of age to do it, and well long story short, I saw her last night during the game and she goes, “do you remember me?” We got to talking, and then I ran into some people from the Incredibulls team who also remembered me as the cheerleader girl. One of the guys asked what I was doing now and goes, “wow haha well you’re in a better position now, I bet you could get the spot on the team if you wanted.” Lol it’s crazy how things worked out, now we are all under the same company and I absolutely love it.

Yesterday was a chill day because it is still pre-season, but as it builds up I will be doing a lot more. One thing I can say though is that it felt so weird coming in and out of The Chicago Bulls tunnel. I am so used to wanting to jump over the tunnel all these years, and this time it was walking into the fans – of course, I am not 6-feet tall, I am no Derrick Rose or Joakim Noah haha so they kind of just stare at you. I remember just standing there when they were all huddled and it hadn’t hit me lol. Just last year I was watching the same thing I was looking at from 2 feet away on the screens wishing and praying I could just be on the business side of this organization. The other thing I was happy about was just being able to take a seat without someone asking for my tickets or hiding it (I used to sneak down haha). They warned me before that it would all be different once it started, and they’re absolutely right.

As they were setting up before the game I was just standing on the court during warm-ups, and just dozed off. I am happy that I don’t get all excited anymore, but it was weird. Of course, during the game I still wanted to cheer on the team and scream during the intro, but yeah that’s a no-no. Haha, I get the feeling that if I did it just wouldn’t look right. So no more screaming lol.

After one night I already never want to watch a game in the stands ever again. I really feel like this is the direction for me to go. I am looking forward to the rest of the season, I’ve already met so many people, but of course I am not going to remember their names right away. Oh, and I also got to speak with Chuck Swirsky. Weird how last year my video said I was trying to get his attention so I can get advice and tips for my career, and now I get to work with him. I went into the press room because I needed to use the bathroom and I hear, “Jen, come over here really quick.” I was a little confused because I had only been there for a bit and he was eating dinner with Bill Wellington and introduced me, I felt like a little bug next to him!

Anyway, those were the highlights of the night, and it was so exciting to soak it all in. I think just after my first day, I am used to it and I know I will do great at this internship. This is the only time I’ll ever really blog about it but I just wanted to do it so I could remember how I felt after my first day and see how I feel months from now. The team I work with is amazingand after one night, I already never want to leave lol. My goal is to work my way up in this organization, and stay there.