My Mom’s Weapon of Choice 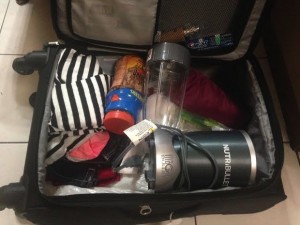 27 hours later, I’m finally at my grandparent’s house in the Philippines! Surprisingly, the flight wasn’t all that bad.

Anyway, I am going to be blogging throughout my trip. It’s my first time here in 4 years, so I know there will be plenty to talk about. First up though – I want to tell you what happened at the airport.

My family and I got there 2 hours early, so we were flying through security. Sidenote – I always seem to have mismatching socks walking through the metal detectors – no shame, whatsoever. As long as they fit, right?

Well, it was super empty and everyone but my Mom had trouble with security. They pulled her luggage and said they needed to talk to her, and when they opened it up, all I heard was my mom saying “really? why? because it’s sharp?” Now I know you’re probably thinking what I was thinking – it was probably a razor, maybe some tweezers or who knows, maybe even a butter knife lol – and you’re wrong. It was a nutribullet. I didn’t know what a nutribullet was until recently, so for those who don’t know, it’s basically a mini blender.

She was embarrassed and yells, “you guys better use this! I didn’t even want to bring it.” Chris and I just stared at her and said “no one told you to bring it.”

Security let her bring it along, but it was just hilarious because I was confused as to why she brought it in the first place. So… I guess if anyone wants to get real creative when in danger, you can use a nutribullet if all else fails.

Well, it’s 5:15 A.M. right now – should probably get some sleep. Look out for future posts on my Twitter, Instagram and of course right here on my site!