Miranda Kerr Does Not Shop at Bakers 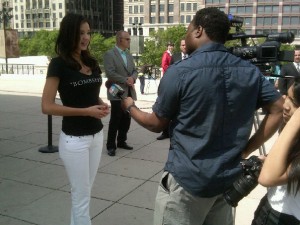 I was going through my old pictures and found this one I was tagged in last summer.

If you don’t know Miranda Kerr, she is one of the Victoria’s Secret Models, and at first I thought she was the one who was replacing Megan Foxx in Transformers 3, but I guess not?

Anyway, I met her when I was an intern for NBC Chicago. She was promoting the new VS Bombshell Bra’s and had some media thing at Millenium Park. I was in charge of pictures for the site.

She was very nice when I met her, and during her interview she even said “I love your assistant’s shoes.”  Later she came up to me to ask where they were from. I said Bakers and she looked at me like I had a booger on my face or something. Of course she had no idea what Bakers was, but hey – she liked the shoes lol. By the way, I wanted to upload a picture of them, but I couldn’t find one. Oh well!