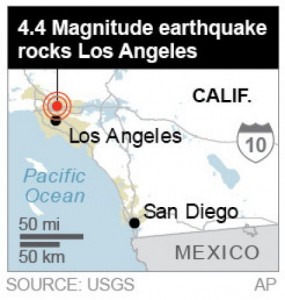 I haven’t experienced a scary one, yet.

Everyone and their Mom has been checking up on me to see if I’m okay – I’m completely fine.

For those who don’t know, we had a 4.4. magnitude earthquake this morning and I woke up to it so confused, and thought it was a dream.

Anyway, before I moved out here, I was scared that the earthquakes would be bad, and a few people have told me one of the reasons they don’t want to move out here is because of them. This is the second one that I’ve experienced here and honestly? They’re not what you think, and aren’t shit compared to what you see in the news. Apparently the only real bad one was in 1994, but nothing crazy like that has happened since (hopefully it stays that way).

Today’s earthquake was fast, and was actually kind of funny to me because it felt weird. It was definitely one of those “whoooooa” feelings not an  “I’m scared I’m about to die” feeling. In fact, I took my ass right back to bed as soon as it was over – it was too early for all of that.

As for the first one I experienced last year in LA? I slept through it lol. I’m not really sure why everyone on social media is making it such a big deal – but maybe it’s because I’m from Chicago and we’ve gone through tornadoes and what not. Hmm.. who knows.

So, for those who don’t want to move out here because they’re scared of earthquakes, you’re fine. Move out here.

Shoutout to those who checked in though, I’m okay.