That One Time I Was On “The Jerry Springer Show” 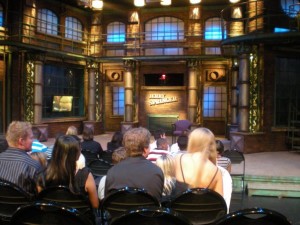 Of all the things I have experienced, I can definitely say I’ll never forget this milestone: getting on The Jerry Springer Show.

For those who are wondering why I was even attending the show in the first place, I loved going to TV shows when they were all still around in Chicago – don’t judge me. This time, it was my Freshman year of college (2008) so I was trying to experience everything I could living in Chicago – Jerry Springer being one of them.

It was myself, James, Sean and Devin. I remember this day as if it were yesterday. We got seated in the center (probably because we were a very diverse group lol – black, asian and white), had to pee but couldn’t because we were on set and the stories, as always, were just some raunchy fucked up shit. The one in particular that we will always remember is the guy who liked to wear women’s lingerie. He was wearing a cheetah bra and thong on the show and the wife was confronting him because clearly that was not okay. Fast forward – if you aren’t familiar with the show, Jerry always opens the audience to questions and comments to the guests. James (my best friend) and I have the same brain, and we already knew what the other was thinking. James asked me for my bra, and fortunately that day I decided to wear a lacey one so it was extra girly, I bent over in my chair, took my bra off and slipped it through the side (as you can see in the picture I had a loose shirt on so it was easy). I stayed bent down and James put the bra on. Not really sure how it fit him considering he’s like 6’3 and a guy, but hey, we made it work. 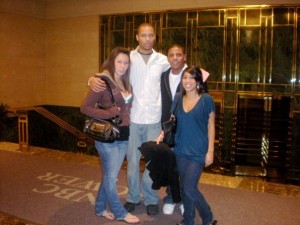 ANYWAY. Jerry finally came to him and James says something along the lines of: “I just wanted to say something to my mans with the bra. I know everyone is hating and it’s fucked up, but I just wanted to let you know, I feel you, and you’re not alone.”

James then ripped open his shirt, and there he was, standing in my bra without a shirt on, and the crowd went crazy. It got so crazy that Jerry made him go to the stage and go on the stripper pole….. he then got Jerry Beads. When he was off the pole, Jerry was still laughing and asked where he got that from, and there was my little self bent over laughing saying “me…” and I refused to sit back up until I got my bra back.

Unfortunately, I do not have a picture of him in the bra (they don’t allow pictures – I snuck the one of the set before the show), but I know for sure that video is still out there, and one day, it will be used against James.