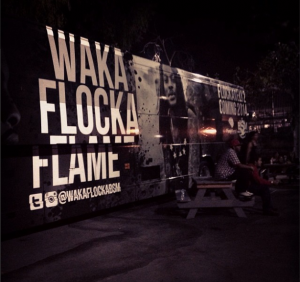 It was an eventful weekend of shoots with Waka Flocka. Did a few Friday night, and the last one was yesterday in Santa Ana, CA.

For those who have not heard, there was a shooting that took place at the show around 9:30 P.M., and I definitely dodged a bullet. We had done our interview around 8 P.M., was heading out at 9 P.M. with Terrence (videographer/editor/friend) and as we were walking out, two other media people stopped us to have a conversation. It was the generic networking conversation – what we do, where we work, etc., and we ended up talking for about 15 minutes.

Santa Ana is a little over an hour away from L.A., and I really had to go pee (sorry for the TMI, but not really). I asked the people we were talking to how far the bathroom was, and she said it was on the other side of the venue, I’d have to go through the crowd, then up or down these stairs. Me being me did not want to go through all that because I hate crowds and needed to get back home ASAP, so I jokingly said I would just pee outside of my car (I didn’t really do it) and left.

Anyway, by the time I got to my car it was exactly 9:32 P.M., and the report said the stabbing took place around 9:30 P.M. The report says no arrests have been made, and there weren’t any motives behind the stabbings – I’m not saying I would have got stabbed, but who knows what could have happened if I ended up going to the bathroom when I needed to. It could have easily been one of those wrong place, wrong time moments, but thankfully, it was not.

I’m very analytical, and the way I see it is that I was meant to do the interview as early as I did (usually at shows I do them after the set, but Waka wasn’t going on until 11:30 P.M.), I was meant to cross paths with the team that stopped us at the exit because I would have went to the bathroom.

I know, I’m probably looking way too into it, but I had a similar incident like this happen on Halloween weekend and it just makes me feel like God has me in this safe bubble, and was another reminder about how everything happens for a reason. Before, I used to always ask “why would this happen” and now I try not to think twice or question anything that’s going on in my life – good or bad. It’s easier said than done, but so true – you don’t know what’s going to happen in the next 5 minutes. As for this incident, no, it never crossed my mind that something like this would happen – and it’s crazy to look into the situation and see how things went about, or what could have happened.

I pray that the two men who were stabbed recover soon – and thank you God for keeping me out of a situation/environment that I was not supposed to be in, and continually watching over me.