Chicago Bulls RT: I Only Speak the Truth.

Well, obviously this is about “The Decision.” It’s amazing how big of a deal the whole nation made this, I felt like it was history in the making or something lol. Of course it was – but to be quite honest, I already knew he was going to pick the Heat. James, Wade and Bosh planned this years ago, why wouldn’t they stick with the plan? lol just saying.

Anyway, we know the love I have for the bulls, and it’s a bummer that we didn’t get the king – BUT not all hope is lost!

Derrick Rose = this generations Michael Jordan. Everything happens for a reason.

This was something I put on twitter, and it was the first retweet of the Chicago Bulls after the decision, followed by Justin Bieber haha I felt special!

All I know is, it’s not the end of the world, so everyone needs to stop acting like it is! Yeah, the Miami lineup just isn’t even fair – then again you never know what could happen. Maybe someone will break their leg? go blind? I don’t know, point is you just DON’T know what the future holds.  Look at what happened with the Celtics.. they had all the superstars, but they still had to work.

Lebron, you had your MVP’s in Cleveland, you can get the ring in Miami, but you could have gotten both in Chicago. Rose is only 21, better yet the whole team is so young, we can and WILL make moves. Think about it, Lebron’s 25, been playing since his high school years.. making that seven. Rose is onto his third, and plenty of time for improvements. OH, and we can’t forget.. remember the draft when it was between Rose and Beasley? Lol HOW did Chicago get the first draft pick? You remember the headlines.. it wasn’t even fair, but it happened.. because everything happens for a reason.

I could go on and on about this topic — I’m still annoyed by how I hear “bulls suck” from people because ummm I guess people forgot about our last two seasons? Yeah we may have been at the bottom seeds, but we still got in. Some didn’t even think they’d ever beat Cleveland in the series, but they did AND on top of that, Cleveland didn’t sweep them ALL the games. Correct me if I’m wrong, but there were a NUMBER of close games in the series. It was a tough fight, they did amazing.

Before I end, I think that Lebron needs to take cover because Cleveland is about to bite his head off if they haven’t already. He’s an amazing player, but honestly – get over it, it’s not like this is the last season of the NBA. Miami may have some of the greatest players on their team, but Miami will never be the #1 franchise team – no one will ever take that away. What up Chicago?!

Sorry if this didn’t make sense, I was just rambling and rambling to let out my thoughts. Point is, Rose is going to be the next Michael Jordan, and I have no doubts that it will be proven this upcoming season. 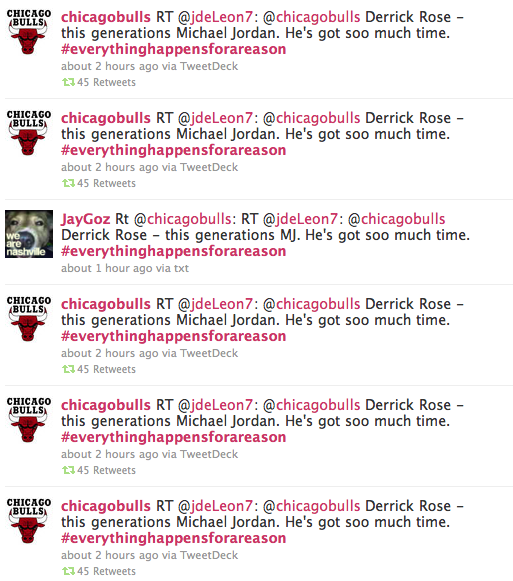