Why I Refuse to Buy Followers on Social Media 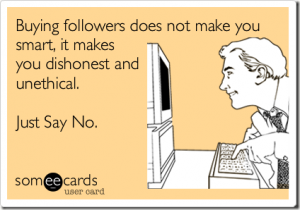 One thing I refuse to do is buy followers for any of my social media. This goes for views on YouTube as well, but I see it more on Twitter, Facebook and Instagram, so focusing on that aspect.

Before you continue reading, don’t get me wrong – I have considered doing this in the early stages of my career, and completely understand why people do it… but hopefully my post will change your mind:

The reason I refuse to do it is because I like watching the progress of my success. As mentioned in one of my previous blogs, I keep track of my stats every week in my planner. To look back at how numbers have grown over a year is one of the many things that motivates me – The progress and knowing my hard work is paying off.

On top of watching my progress – I’ve realized that buying followers/views isn’t beneficial. Why? PEOPLE KNOW IT’S NOT REAL! So why are you spending money on it?!

Example #1: If you have 15,000 Instagram followers and only have 20 likes per photo – Doesn’t make sense. Your followers obviously aren’t real.

Example #2: 100,000 followers on Twitter, but no retweets/favorites – Doesn’t make sense. Your followers obviously aren’t real.I get it, it’s used for promotion and publicity, and it will make you and your company look better if you have a bigger following – but it also kills your credibility when people know it’s fake. Stop caring so much about numbers and looking popular because the numbers WILL grow over time if you work your ass off.

You may not get 10,000 new followers within a year, shit, maybe not even 5 years – but trust me, growing slow and gaining that 10,000 over time, will make you feel much more accomplished rather than just buying them for that image you dream of having. Stop taking a shortcut and just reach your dream man. That’s all I’m saying.

SAY “NO” TO BUYING FOLLOWERS!