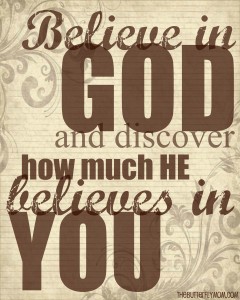 Question: Why is it that such a seemingly smart, educated girl such as yourself believes in something as ridiculous as the idea of a God?

Here’s a question I was asked a few weeks ago, but have been holding back because I wanted to go in-depth on the subject. After hearing today’s message from Toure Roberts, I knew today was the day.

Today, Toure talked about how if your testimony and faith in God is positive at all times, you have to be willing to be called a fool. I’d say this question was borderline calling me a fool – but, it’s a great thing.

I was never questioned about my faith until this question, and it made me feel amazing after listening to today’s message because it was confirmation that my faith in God is something I’m really becoming known for.

I believe in God for so many reasons that if I listed them all, you’d be reading this post for hours. So, let me try and break it down for you.

Everything I’ve ever accomplished in life are things that don’t just happen everyday. I don’t mean that in a conceited way, but that’s one of the reasons why I know God is 110% real. From how I got my jobs – Twitter or Craigslist (still haven’t shared this story, but will soon!) or getting on Oprah’s show because of a pop-up ad. Although I’m a hard worker, it doesn’t take “hard work” to send out a tweet or browse the internet. God just knew how much faith I had in Him, and that was my reward.

[RELATED: How I Got Oprah to Interview me on Her Show]

My faith now is so incredibly high, it’s immeasurable. Everything I want to accomplish in life, is going to happen in due time because God’s purpose for me is to use my story and life to change the world. To be that role model to this generation and show them how dreams can come true, and how God is real.

I believe in Him because whenever I pray or ask for a sign for help, He always does just that – whether that’s through the messages at church, or using someone in my life.

I believe in Him because no matter what mistakes I’ve made, He still found me worthy enough for forgiveness, and to live the life I have. He has never failed me, and never will.

I already know people think I’m crazy, but won’t speak on it – and that’s what I want. I want people to be curious and wonder why I have so much faith in Him because at the end of the day, when everything that’s left for me in the future comes, there’s going to be no explanation other than they were blessings from God. Hard work is one thing, but I assure you, having faith in Him is another.

I strive to be that genuine person, and stay on top of consistently listening to preachings, and be a good example to others. I try to shine as much of God as I can through me so it can encourage people to want to do the same.

Trust me, I’m FAR from perfect. I make mistakes, I have flaws and a whole list of qualities and characteristics that people wouldn’t want to take from me, but that’s how I know I can be a real example. That’s why my personal blog has been successful – I keep it real. People can actually relate because I don’t try to act like I’m perfect.

There’s people in this world that are afraid to really showcase their faith –  I’ll never understand why because there’s so much more positive than negative in that situation. Actually, there’s no negative at all. One, as mentioned, it’s confirmation that your testimony is strong. Two, God will reward you for your faith. Three, you may encourage someone else to believe in Him – I had someone who didn’t believe in God message me and say that I encouraged him to do so, and it was one of the greatest feelings in the world.

To sum up my answer – I believe in God because He has given me so much more than I could have ever imagined. From the people in my life, my lifestyle, to being there for me – I can’t help but believe in Him because there’s no one else who could love someone so much and give them all those blessings.

On that note, there’s probably some people thinking “she only believes in God because she has a good life.” Don’t get it twisted – just because I speak on the great life I have, does not mean there weren’t or aren’t any struggles. There definitely were – but even at those times, I still believed in Him because I understood that no matter the situation, it was always going to end positive.

That is why I believe in God. I hope one day you will believe in Him too.