What Spiderman Taught Me 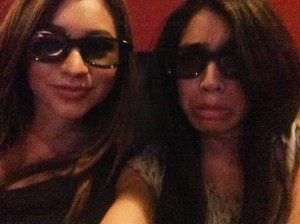 Last Thursday, my girl, Rikki came to visit me at my work – which turned into her asking me if we could eat healthy (it didn’t happen of course), and asking me to come along to an Amazing Spiderman 2 screening (which I’m surprised I agreed to because I haven’t seen the first one lol) Here’s what I learned from the forced girls night out:

Not a fan of fancy food courts: The screening was at the Century City mall, and since I took forever at work and wasn’t down for the vegetarian place, our only option was the food court. Ummm… I walked in there and have never heard of half the places in there. It was like mini restaurants. All I kept thinking was, “where the McDonald’s at?!” We ended up eating some chinese food, which for the first time ever, I had more rice than needed for my meal.

You can watch this movie without seeing the first one: Like i said, I haven’t seen the first one – but it was pretty easy to understand the story. I loved it. In fact, I loved it so much, I was mad I had to pee mid-movie because I didn’t want to miss any of it.

Fuck 3D movies: These type of movies give me a headache – and with all that action in this movie, it was on level 1000. I tried to watch it without the glasses. Didn’t work.

I’m scared of movies that aren’t meant to be scary: There were so many times throughout the movie that I kept closing my eyes or would jump. Rikki kept asking, “why are you covering your eyes?” I don’t like guns. I don’t like violence. I squirm when I have to watch it. 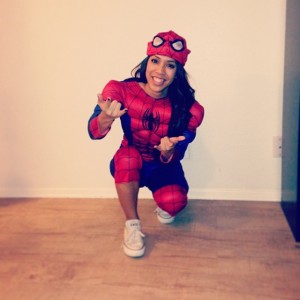 I want cheesy love: Peter and Gwen have the cutest relationship in the movie. It’s so cheesy and cornballish, but it made
my heart melt. I wish I could go into more detail about it, but I’d probably ruin the movie for you.

Tomboy’s click: Rikki and I both don’t have many girlfriends, and we came to the conclusion that we click so well because we were both tomboy’s due to growing up around a family of boys. I know I called this a “forced girls night out” but really, she’s the one who said it first, and it kind of was lol. BUT – I wouldn’t have gone out with her or seen a movie that I wouldn’t understand if I didn’t want to.

The movie comes out May 2nd – Make sure you go and watch it!

P.S. If you’re wondering about that Spiderman picture to the right of this post, I swear I’m not a fan like that lol. How funny would that be though if I actually wore that to the movie though? You can read why I have that little boy’s costume on here.