17 Jobs You’ll Never Guess I Had 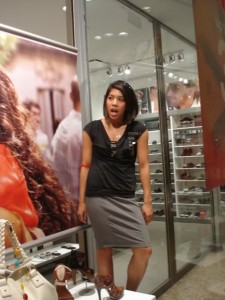 I’ve always been a worker – it started in high school. This post came about because someone asked me what my first job was, and I thought – why not just share them all?! All, meaning 17. Yes, 17, and I’m only 23 – and no, I was never fired. I have issues. Here’s a full list of all the jobs I’ve ever had.

Dairy Queen: I was 16-years-old, and making $6.50 an hour. Best part about it was the ice cream, hardest part was trying to get their signature swirl on ice cream cones. Fuck that signature swirl. I never got it right.

Famous Daves: My first job was in the food industry, so I continued the path apparently. This place had the best wedges and corn bread, and the cheesiest shirts. My uniform said “RIBALICIOUS RIBS.” But, I’ll give it to them – those ribs were uh, ribalicious.

Abington: I was the front desk receptionist at this nursing home when I was 16. This was my first “grown up” job. I would admit patients into the facility (paperwork, making calls, etc.), and it was a half-hour commute. You’re probably wondering where I got such a random job, and it was because my Uncle was the administrator of the building. I bet everyone wondered what a 2-year-old was doing at the front desk of a nursing home.

Foot Locker: “Would you like to try out our shoe cleaner?” HATED saying that. And no one EVER bought the damn shoe cleaner. Anyway, it was first retail job at the mall and I had a 30% discount. I didn’t even like shoes like that, but fuck it, it worked.

Urban Behavior: This was a clothing store, also at the mall. Pretty sure this store is closed down everywhere now.

Hollister: The smell of that store could literally wipe out your senses. Looking back at it, that place was and is probably still overpriced. That being said, – if you’re reading this and you shop there, just stop. You’re going to end up hating it within the next few years.

Express: I was a seasonal worker here. 50% discount was nice because their clothes are pricey.

Macy’s: The most annoying part about this job was asking if people had a Macy’s red card. Also, one of the manager’s reminded me of a creepy Waldo. One thing I did learn about them – they will let you return anything and everything.

Barefoot Bay: Okay, everyone and their Mom in my hometown worked at the rec center – especially when the new waterpark opened. I was an attendant? I think that was the title, and basically told kids when it was safe to go down the slide. The only thing I liked about it was it felt like high school. Literally. Everyone worked there.

Aldo: My second “grown up” job. I was a keyholder/manager. This was honestly my favorite job before I started getting into sports, music and entertainment. I worked at three different locations – mall in the suburbs, then Water Tower in Chicago and State Street Chicago. Although a keyholder was the level under a manager, the other keyholders and I managed this store because the Store Manager got fired. I was 17, working 40+ hours a week, but absolutely loved it. Also, we had a bomb discount of 50% off. I’m an asshole now though because whenever I shop at Aldo, I cut them off when they ask me if I want in-soles to make my feet comfortable, or shoe cleaner. Then I proceed to tell them I used to manage at this store so I already know how it goes.

Baker’s: Another shoe store. Apparently I loved working for shoe stores? I liked this location because it was walking distance from my dorm – and also got that 50% off discount. Also, I made one of my close girls friends, Ashley, there – the first time we met she took me to my first “VIP” party – Derrick Rose’s 21st birthday. I’ll save that for another post. Actually, I made a video blog about that, and it had nearly 50,000 views before I took it down. Why did I take it down? Because I knew I wanted to work for the Bulls eventually, knew I would end up interviewing him soon and that would have been embarrassing if he or anyone saw that video when I was speaking from a fan perspective. If you’ve really been supporting me since day one, you remember that video lol.

Inspire a Nation Business Mentoring: Another “grown up” job. This is the job that really taught me business and why I know a lot about it. At I.A.N., I consulted with insurance companies on how to better their agencies and traveled for workshops. Our biggest clients were AllState and MetLife. It was crazy, working with the President’s of these companies, and learning so much about business. My boss also was my mentor who taught me a lot about myself and how to go about my career.

GoWhere Hip Hop: The company that introduced me to this industry, and my first on-camera position. Working  there was my favorite job overall because it was a group of young individuals who hustled. Everyone I worked with started as “people I work with” to people who grew to be some of my closest friends, to people who turned into family. We didn’t know what was next, or how things were going to come about, but it always worked out.

NBC Chicago: I was the web development intern where I wrote articles, and helped with photos at some events. One thing I learned from this experience – I was shy to be over enthusiastic on-camera because I thought I looked stupid.

Chicago Bulls: I was the BullsTV intern for the 2010-2011 season. What a great season to be a part of. Mmm… I learned a lot here about corporate, and also myself, but I’ll get into details about that in another post.

HotNewHipHop: I started as a reporter in July 2012, then got promoted to full-time as the Communications Manager and Senior Correspondent when I moved to Los Angeles. I also learned so much from HNHH, and can honestly say I feel like I’ve met every possible person I need to know in order to lock in some kind of interview or project with any artist out there. Also, my boss is hands down the best boss I’ve ever had. I can go on and on about HNHH, but again, I’ll save that for another post.

New Job: I plan to share another position I started in 2014 soon!

Well, those were all my jobs. But, pretty sure I’m forgetting something. Which one surprised you the most?

[SEE ALSO: How I Landed a Job with The Chicago Bulls]