What Hurts and Annoys me the Most 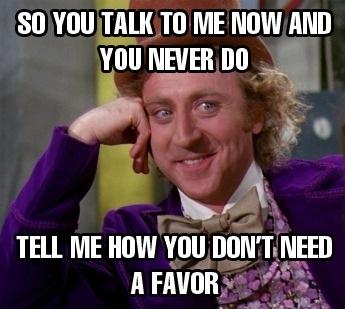 Everything that has happened in my life was because of two things: God and the people who gave me a chance to prove myself. These things would not have happened if I did not ask, but anytime I asked for a favor, I made sure both parties would benefit so I was not being selfish.

Sadly, I could not count the times someone asked me for a favor and I had not talked to them in years, or, those have asked me for something, and when I took the time to reply to say I could not give them what they wanted, I got no response back, or a simple thank you for trying.

If you really know me, you know that I am all for helping people out, but when it is people who only talk to me when they want something, that’s a different story.

I decided to write about this because I didn’t realize how much it actually hurt and annoyed me until someone who was one of my best friends throughout middle school, high school, and college randomly text me.

I hadn’t heard from him/her since last year and was so excited when he/she popped up on my phone.

The text started with, “Hey how are you!” I thought the rest of this three-page text was going to say, “I haven’t talked to you in so long I miss you,” (what it would usually say) instead, it was followed by “I need a favor.”

When I replied and said I couldn’t help, this person did say thank you, but that was the end of the conversation. No “what have you been up to,” no “how is your family” nothing – all things I was ready to ask him/her because again, I was excited when I got the initial text.

Sadly, I realized that someone who I used to talk to everyday only contacted me because he/she needed something – You could have at least pretended like you were contacting me for something other than a favor.

I could give you a whole list of the other ones I’ve been asked, but instead I’ll narrow them down to my favorite: when people ask me if I know where to get cheap tickets for Bulls games, a concert or event as an opener. And when I tell them Craigslist or eBay, they reply with “could you get me a discount?” (No, I did not see that one coming at all). Then there are those will have no shame at all and say, “can you get me tickets for so and so game or so and so event?” Yeah, that needs to stop.

If I could give 80 passes to every event/game I went to, I would – but the thing is, I don’t. When I am able to get extras, the people who get first priority are my family, then the friends that have been there for me since the beginning, followed by the people who actually talk to me more than once a year.

So, spare yourself the time, stop being cheap and stop pretending like you have never heard of Stub-Hub.

It honestly got so ridiculous, that I changed my number twice in less than a year, and now I rarely check my Facebook messages. With that being said, sorry for those people who asked me for a favor and I am just now seeing your message. I would have answered you now, but, when I saw you erased me as a friend because I didn’t reply, well, let’s just say, I had a change of heart.

Bottom line – if you ask me for a favor that is realistic, and contact me on times other than when you need a favor, I’ll be more than happy to help. If you don’t talk to me, aren’t grateful, or go as far as asking a family or friend to ask me when I already said I couldn’t (yes, this has happened), then you’re going to annoy me.

There are a lot of people out there who can back me up and say I’ve helped them out, and then there are those who will read this and feel salty.

If I offended you, I am sincerely sorry, but I’m already paranoid as is with who I let in my life because it has come to the point where I think someone just wants something in the end. And… when it comes down to having to question someone who I once called my best friend, yeah, that doesn’t help the situation either – it hurts, I’m tired of it and it feels good to finally get this off my chest.