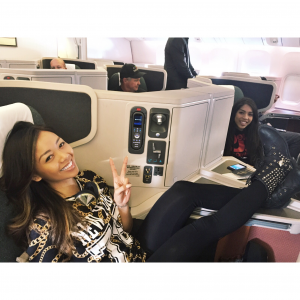 I’m a little late on this post, but bear with me – I just went from Los Angeles to Macau and Hong Kong to Chicago back to Los Angeles, all while having Bronchitis (and I still have it).

A lot of people have been asking me about the trip, how it all came about, etc., so I’m about to share it all with you. First things first – how did this opportunity even come about?

I didn’t think this trip was going to happen. There are a lot of people who says things in the industry, but never stick to their word – this man, Reggie, stuck to his word. Although I didn’t want to get my hopes up, it was hard not to, considering Skee is the one who introduced us. Long story short, Reggie works with everyone. Literally, everyone – in the boxing world, he’s friends with everyone but is currently representing Pacquiao. Skee and Reggie were having a meeting and Skee randomly called me into the office to see if I could talk for a few minutes. He introduced me to Reggie and as soon as he mentioned Pacquiao, I joked and said, “oh nice, my uncle.” He started to laugh, and I said “just kidding, but wait, maybe not, I’m Filipino, we’re all related.”

We started talking about who we should bring out to China for the fight from rappers, athletes, artists, viners, etc., and well, as you can tell from the pictures and post, Liane and I went out there, and Skee of course was there too! 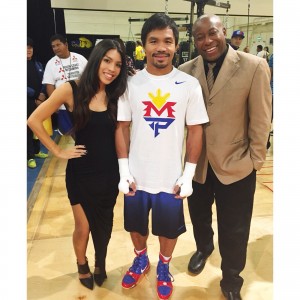 It was funny because I was working with Top Rank for 2 weeks before I even told Liane about it lol. Again, it was all just too good to be true, so I didn’t want to tell her and then it not happen. Now, I went on the trip, and it still doesn’t feel real. Honestly? When I was on the plane out there, I teared up just thinking about what was about to go down, how everything has been coming together and I was overwhelmed with happiness because of how great God really is. It was such a wonderful experience, here are some things that you didn’t know or see on social media:

THE FLIGHT: This was the best flight I have ever been on in my life (Cathay Pacific). I felt like I was in my apartment because the chairs folded out like beds, we had our own tv’s and they were pretty much like little cubbies because of how it was separated. I have never flew to another country in business class, and the service was incredible – you could get food whenever you wanted, and they were just so accommodating.

MACAU: This place is just like Vegas, but quieter. They take gambling much more seriously, aren’t a lot of clubs.. I believe just one, and no one smokes or drinks while they gamble – BUT it literally looks just like Vegas, it was trippy. 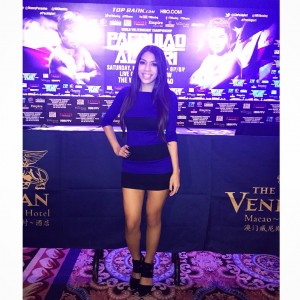 HONG KONG: I’ve been to HK before, but back in high school. HK is beautiful. In order to get to Hong Kong, you have to take an hour ferry from Macau. Liane and I had two touristy spots in mind – Victoria Peak, which is a view of all of HK, and Ngong Ping, which is a glass cable car ride that takes you up to another island with the big buddha. Funny thing is, at this other island are cows and bulls that aren’t tied up. If you follow me on Instagram/Snapchat, you saw what happened to me – if you didn’t, check it out here.

PACQUIAO: It was so cool to follow Pacquiao around throughout the week at his training sessions, press conferences and of course the fight. For those who don’t know, I’m 100% Filipino, so that is what made this experience even better. He’s incredibly humble, and gives everyone the time of day.

FIGHT NIGHT: You know what’s weird? When the fight was playing in the U.S. (Saturday night), it was Sunday morning in Macau. So, it wasn’t really fight night for us, more like fight day. We had to be at the arena at 9:30 A.M.! The best parts about the fights were that we had all access, and because of that Liane and I didn’t realize what entrance we walked out of (the main one) and for the first fight, security was yelling at us to stand against the wall because they were about to come out. Pretty sure we video bombed the fighters on PPV. Whoops. The other cool part was our seats – we were sitting literally 2 seats away from Chappelle and I’m not going to lie, that made me feel like a G to be placed in the same row lol.

VINES: Liane wanted to shoot some vines and we came up with two funny ones. I have never shot vines until with Liane and it was funny because I didn’t realize how much time it takes to do just one 6 second video, and also because I’m a terrible actress. See them below. Sidenote: No, that was not really a phone, it was a remote lol.

I could go on and on about this trip considering I was there for a week, but this post is pretty lengthy. I’ll probably write some more about it later, so for now, check out the gallery and vines below!

Thank you Skee, Reggie and everyone at Top Rank for allowing me to be part of such an amazing opportunity. I met so many great people, and will never forget this. It was truly a blessing.

I could go on and on about the trip, but this post is already lengthy. Check out the gallery of my favorite photos from the trip!