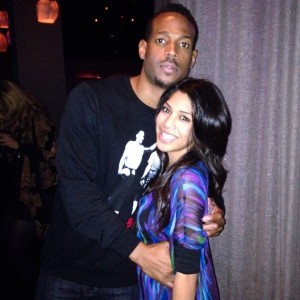 Marlon Wayans hosted a What The Funny (WTF?!) Holiday Party that took place at the Lexington Social House in Hollywood.

The Holiday Party included free valet, a buffet style dinner and an open bar, one of the coolest fireplaces I’ve ever seen (it was made of rocks and glass), and it was broken off in two sections: one for mingling, and the other for performances.

On the note of performances, the most entertaining ones were the rap battles Marlon was having with attendees in a random corner of the lounge, and the white girl dancing on the ledge of her table. She was not part of the night’s line-up, but really should have been because I swear the whole room stopped to watch and take pictures/videos of her (I’m sure you can find them on Instagram).

Now, here are my WTF?! moments (things I learned) at the WTF?! Holiday Party.

1. If there’s a buffet dinner and dessert, don’t come to that event late (in my case, 2 hours smh) because you’ll get stuck with whatever is leftover – some cookies, chicken and fried calamari. Not complaining because they were still good, but I was hating on the people who were enjoying their pizza. WTF?!

2. Free valet is cool, but you’re going to end up waiting forever for your car, even if you leave early. Everyone tries to leave early to avoid the chaos, but since everyone thinks they’re thinking ahead of everyone else and really not, we all end up getting stuck with what we were trying to avoid to happen. You’re better off parking somewhere else. WTF?!

3. No matter how cold you are, force yourself to suffer while waiting for valet because apparently if you don’t grab your car right away, they will take it for a joyride. I was so excited when the car finally came, and as I was walking towards it, dude sped off and I had to ask the other valet guy to get it back. WTF?!

4. Must spend more time with my friends. I saw so many familiar faces that I hadn’t seen in awhile, and it made me feel like shit because I couldn’t remember not only the last time I saw them, but also the last time I did and it wasn’t because of an event we were both attending. I need to work on that! Maybe that should be one of my New Year resolutions? WTF?!

[RELATED: 5 Things I Learned From Halloween]