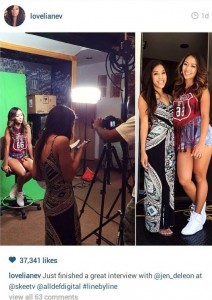 Last Friday, I had a shoot with recording artist and viner, Liane V. The way this came about was because my friends at Midi Mafia (Shoutout to Bruce and Yazid!) came by The SKEE Lodge with another artist on their roster, Elijah Blake. Following my hilarious interview with him about how he deals with anger (writing out a tweet and putting it in his drafts), Liane was brought up and we worked on a date to bring her in for an interview.

Before we locked in a date for her interview, Destorm actually hit me up to go run on the track with them a few days after the Elijah shoot. Ummm… we already know that wasn’t happening so I met up with them at California Pizza Kitchen, where I ordered a kids meal mac & cheese. Favorite line from that day when I offered to share my mac & cheese? “I didn’t come to a restaurant to eat valveeta.” LOL.

Anyway, I met Liane and explained what we were going to do to help promote her as an artist, and then we locked in the interview for a few weeks later. This by far was the sweatiest interview I’ve ever had because our AC broke at the office on of course, the hottest day of the week. It was over 100 degrees out! We literally had to stop throughout the interview because it was just too hot and we needed to get air smh.

The shoot was for the project I’ve been working on for All Def Digital (Russell Simmons & Steve Rifkind), Line by Line where artists and comedians interpret the most ridiculous lyrics. We’re wrapping up the first season, in which I interviewed Wiz Khalifa, Ty Dolla $ign, E-40, B.o.B., Affion Crockett, Jack Thriller and many more. Our next shoot with her will be focused on her as an artist.

Now that I think about it, I haven’t posted ANY of the videos from Line by Line (I really need to stop slacking with posts) but I’ll put the entire series in one post soon! For now, check out episode 1 below: