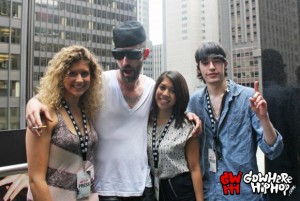 This Lolla weekend we got to hook up with DJ White Shadow (Lady Gaga’s DJ/Producer) who proved to be at the top of my list for interviews for several reasons: the location and the content. The interview took place outside of The Hard Rock Hotel, during the “Miami Express Yourself Oasis”and “Express Rocks! Suite” events. The balcony we are standing on had an amazing view of Michigan Avenue, and you could even see one of the screens at Lollapalooza.

Anyway – the content of the interview. Let’s just say, we broke the ice early, and it’s not my typical “hey guys this is Jen DeLeon with Gowherehiphop.com” introduction. Well, I say that later, but you guys get to see what goes on before the camera starts rolling – well, so we thought. After the giggles and laughs came out, we put our serious face on, and this is what went down during the interview:

I wanted to first talk about his tattoos because of my previous interview I did with Code Of Conduct – and because he had so many, he let me pick which one I wanted to talk about. The one I picked apparently was a Daruma – which allows the owner to grant wishes. Both of DJ White Shadows dreams came true – find out what they were! Following tattoos we discussed his work with Lady Gaga, which includes “Born This Way,” and “Edge of Glory.”

I wanted to steer this interview to a more personal level, so I asked about when he started DJing, which happened to begin in second grade! I was playing in the sandbox when I was in second grade – he made me feel like a slacker. When we talked alternative career paths he said architect or maybe Asian. Once he made the Asian comment, the interview tables had turned and DJ White Shadow took a turn at interviewing me!

The interview closed off with comments about having babies together…, and him speaking Japanese to me. I only know English and a bit of Tagalog (Filipino), so for those who know Japanese and want to translate for me what he said in the comments – good looking out! Enjoy the interview!