John Legend Concert at The Ravinia 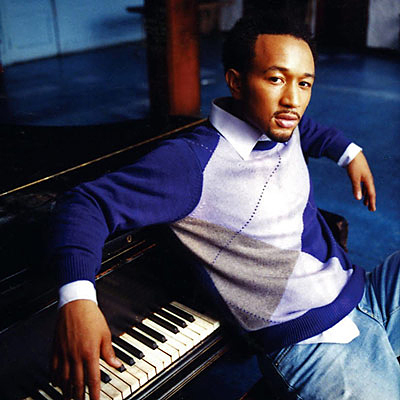 I got the privilege to attend the John Legend Concert last Tuesday, and for those of you who have attended one of his concert’s you would have to agree, he is amazing.

I went with three people: James, Sean and Marina and this night was full of luck, no joke. We got the free tickets because of Sean’s cousin who is an employee at the Ravinia. Once we got there we found out the tickets were not valid for that night because they were lawn seats and you are not able to use them for a sold out event. We were already planning to jump the fence or crawl through the woods to get in so we weren’t sweating it. After a few calls we got right in about twenty minutes later.

When we first walked in we didn’t even know where to go – there were thousands of people there: you couldn’t even see the grass (it was outdoor). The place was filled with people dancing, a lot of coolers, food, blankets everywhere and everyone just having a great time.

The stage looked as if it was underground and we were standing above it. We were lucky enough to get a spot right behind the last row of the seats where we could see everything clearly. The opening acts were India Arie and Vaughn Anthony (John Legend’s Brother). Now, at most concerts (at least the ones I’ve been to) their entrances are just something crazy at the stage, a big intro such as flashing lights and their best music, John Legend on the other hand likes to play with his fans emotions. He came from the back side of the seats where he began to sing and walk down the aisles – Fans were going crazy trying to touch him and there was even this asian woman who was going crazy because he was singing to her and you could see her yelling “I LOVE YOU JOHN, I LOVE YOU!” This was very creative and something different: it truly is a way for him to stick out from the rest.

The beginning of the concert he performed all his slow songs such as Good Morning and Everybody Knows – then came another luck in the night – a generous lady went up to James and handed him two tickets to get actual seats at the concert. There were four of us, but James and Marina were the biggest fans so they got to go in and THEIR SEATS WERE SECOND ROW! (Pictures from this view will be coming soon)

“I was taking so many pictures, I felt like such a girl.” – James Williams

John Legend’s performance was amazing, I loved his style of clothing and the things he did: pulled some girl on stage for a slow dance for one of his songs, had a video whether it be a picture or something from a music video that was relevant to the song he was performing playing in the background and for <i>Greenlight</i> he literally had green lights hovering over the stage. All the fans thought the show was over when he finished <i>Greenlight</i> because he bowed and waved to the fans as if he were saying goodbye, the lights went off and people started to walk away to pack up their things; however, like i said – he likes to play with his emotions – the bright lights came back on and there was JL in a fresh, white suit. He sang a couple more songs and the night ended with <i>Stay With You</i> and fans slow dancing the night away.

I’ve been to concerts of Fall Out Boy, Gym Class Heroes, Plain White T’s, The B96 Summer Bash, Neyo and much more, but John Legend was definitely one of the top performances I have ever seen. If you ever get the chance to see John Legend live, go! You will NOT regret it.

Here is one of the many videos I have from the event: I chose this one because it was a shoutout to the Chicago crowd, hope you enjoy it! (Click the link)

(I am sorry the video is not clear my camera was acting up so I recorded the footage of off the t.v. screens they set up for the show)

“Success means having the courage, the determination, and the will to become the person you believe you were meant to be.” – Greg Sheehan