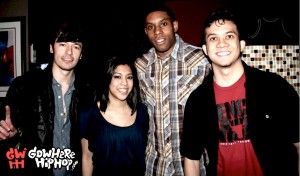 Last week I interviewed CJ Watson for his meet and greet event at Fifty50 [which by the way has amazing wings!] . The event was in support of his foundation, The Quietstorm Foundation, which consisted of a meet and greet, raffle, as well as selling Bench Mob T-Shirts. [All proceeds from the event were donated to the foundation].

Before and during the interview, we both could not help but laugh – which I can’t lie, made it kind of awkward for the interview haha. Anyway, I will save that story for another post.

Until then, check out the interview where we talk about his foundation, Bench Mob rituals, the funniest player on the Bench Mob [which really surprised me lol], his current pump up song during the playoffs, as well as his thoughts on what will take place during this intense Bulls-Miami series.