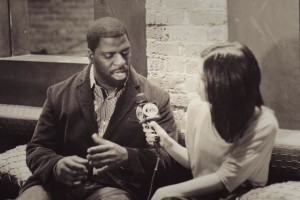 About two weeks ago, I had the pleasure of interviewing, Rhymefest. The interview took place at Bon V, and was a networking event in honor of electing him as the 20th Ward Alderman of Chicago.

During the interview, we talk about what he plans to do to improve and give back to the community, as well as of course, his music. If you didn’t know, Rhymefest is a Hip-Hop Artist and Writer (He wrote “Jesus Walks“) and co-wrote “Power,” with Kanye West. The story behind “Power” is very interesting, especially because it is a song I constantly have on replay.

To close out the interview, I asked him what advice he had for artists for this generation. I absolutely love what he says because it applies not just to artists, but to everyone.

I wouldn’t even call this an “interview” but more of a conversation. It was very laid-back, and the longest, most interesting interview I have done so far.

I’m very grateful that I was able to take part in this event and get to know him. He has the right mindset, and I really do hope he gains the title as 20th Ward Alderman of Chicago – he will make a difference.

If you missed the airing of the interview/episode on UrbanGrindTV [channel 25: Comcast, RCN and WOW network] check it out here: