3 Secrets About The Staples Center

A few weekends ago, I covered JingleBall 2014 – A pop concert that takes place in L.A. This was my first time at The Staples Center and I observed some random things.

Their Bathrooms Are Miles Away: My bladder is the size of a bean, and I always have to pee – or, I always think I have to pee. I can never leave somewhere without peeing first even when I don’t have to because one of the worst feelings is being stuck somewhere with no bathroom, such as traffic. Times like those are when I wish I was a dude.

Anywaaaaay, in the tunnel, their bathrooms are tricky. The security guard said it was about a 2 minute walk down, and he wasn’t exaggerating. On top of the fact that I have little legs, so it really took me about 5 minutes. If you’re walking in the tunnel, don’t stop at the first bathroom sign you see with the purple walls because when I went in, I looked left and there was a red curtain and behind there was lockers. Clearly I went the wrong way. I turned to the other side, and there were employees (women) changing. That was not the bathroom. That was the employee locker room. They looked at me like I was crazy.

Uniform Dry Cleaning: I’m sure you can relate when I say I’ve had plenty of jobs that required uniform – Foot 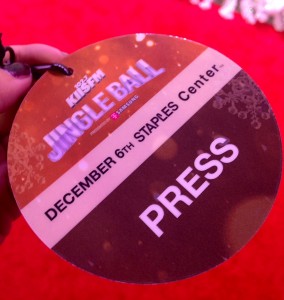 Locker, Dairy Queen and Famous Daves just to name a few (yes, I worked at those places – don’t worry, I have a post about all the jobs I had before for another post). So, I’ll never understand why companies are stingy and only give you two shirts to wear throughout your time as an employee – wouldn’t it be nice if you didn’t have to wash the same two shirts every week?

[RELATED: Webisode 13 – How I Landed A Job With The Chicago Bulls]

Well, work at The Staples Center and your wish will be granted. They have a whole dry cleaning operation just a few steps away from the locker rooms – uniforms divided by size and everything. I observed employees constantly dropping off and picking up their uniform – and kept thinking that would be convenient as fuck. Now, I’m not sure if all stadiums/arenas do this, but I’m assuming so.

Catering: For big events such as these, there’s always catering. I was under the impression that catering was also for media considering other people in the press room were devouring all kinds of cookies and sandwiches.. I was wrong, again. I went in there with my eyes set on this big bowl of pasta. I was probably drooling as I was making my way there, and as soon as I reached for the plate, some asshole put his hand on the plate I was grabbing. No scratch that – he didn’t just put his hand there, he might as well have punched a hole through it lol. Treated. Apparently you need a meal ticket for catering. Well, that’s the rule – but I later found out there’s a trick behind it.

My friends at (not exposing the company’s name) said in order to get food without the ticket, you have to walk in there without your press credentials hanging around your neck, and act like you belong.

And those are the three secrets about The Staples Center. On a work note, I did a few interviews, but the most interesting one was with Kathy Griffin. She reacts to her grammy nomination and tells me who she thinks is the baddest bitch. That should be posted soon – look out for it!