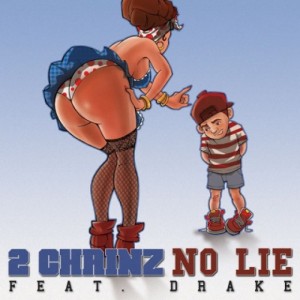 This afternoon I spent my time on a conference call thanks to Def Jam Records, with today’s trending topic on Twitter, 2 Chainz, who was calling in all the way from Los Angeles.

His new track, ‘No Lie’ featuring Drake dropped today – and is one of many that you will see on his debut album, Based on a T.R.U. Story, which is set to be released on August 14.

“If you think I’m killing features now, just wait until the album,” he said.

Last week alone, 2 Chainz was working on nine features, which include Chris Brown, Meek Mill and someone special.

“I was surprised that they even called me (this track will trend on twitter). It is someone I have ultimate respect for, and it feels good to know they rock with my campaign,” he said.

The cat will be out of the bag soon because the mystery artist asked him if he was okay with it being released before his album.

I wonder who it is?

Anyway, as we all know, 2 Chainz’s success came from a number of factors: his work ethic, his features, and of course, his signing to Def Jam – but there was much more to that.

“The determining factor is that my campaign deals with real. I am part of a minority and want to be the voice of that minority,” he explained.

“It was my work ethic, mindset, being in a different position, being my own CEO, and taking my ideas and moving along with them. It was taking my career into my own hands.”

With a track record like his, everyone must wonder what it is that inspires him and his music, which is his strong infatuation with instrumentals.

“I’m not a huge rap fan. I’m a fan of old R&B music because they have more lyrical content,” he said.

“When you listen to something, you should be able to get something out of it. That’s what music does to you.”